Who is the Mobiles father?

If Alexander Calder’s name remains inseparable from the history of mobiles to the point of talking about “Calder mobiles”, it would seem that history has been unfair to an Italian artist, unjustly forgotten, left in the shadow of the brilliant American sculptor and painter… 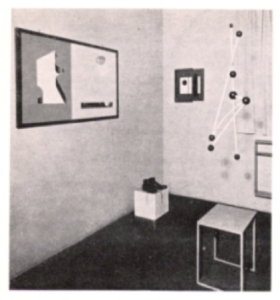 If we stick to a simple historical reading, it is indeed Bruno Munari (1907-1998) who, the first, exposes to the public free geometric shapes in the air with what he calls his aerial machine (macchina aerea, 1930) and his unnecessary machines (macchine inutili, 1933).

A member of the futurist movement, Munuari quickly broke away from it: he found it contradictory to exalt speed and dynamism while remaining within the limits of a two-dimensional painting. According to him, it is only by introducing the temporal dimension that we can have changing and dynamic plastic forms in line with the spirit of futurism. Kinetic art thus had its first beginnings.

On the side Calder (1898-1976), it was not until 1932 that the artist exhibited for the first time his first abstract sculptures made of rods and metal plates painted in black and white and enhanced in places with one or two solid colours. It is to Marie Cuttoli, a discreet figure of the avant-garde, who directed the Galerie Vignon located at 17 rue Vignon in Paris, that we owe this exhibition of about thirty articulated sculptures, half of which were set in motion by small motors that the artist operated (like his famous Cirque!).

Finally, it is to another artist, and not the least, that we owe the name “mobile” to designate these moving sculptures. It was indeed Marcel Duchamp (1887-1968) who proposed to call them “mobile” during their exhibition at the Galerie Vignon. Seduced by this name, Calder appropriated the term.

Discover our range of decorative mobiles, in other words “Calder mobiles”