Vintage at its best!

Why is Vintage so attractive?

Vintage is reassuring. Concern about the future invites us to look back and the 1950s and 1960s were full of promise in the aftermath of the Second World War.

Vintage is synonymous with comfort and progress. This is probably the period in history when domestic comfort has never been so accessible and sought after. Reread Roland Barthes or review Jacques Tati’s films to see for yourself.

Other telling clue: Maison & Objet now brings together some 90,000 visitors at each of its events at Parc des expositions in Villepinte. Its predecessor, the Salon des Arts Ménagers (1926-1983), was held at the Grand Palais, a cultural centre with a large C, and then, from 1961 onwards, at the CNIT, the architectural symbol of a period. The SAM welcomed a little over 250,000 visitors for its ninth edition in 1932… and then more than 600,000 seven years later. In its golden age at the end of the 1950s, the level of attendance was well over a million visitors!

Vintage blends the colours and the materials : 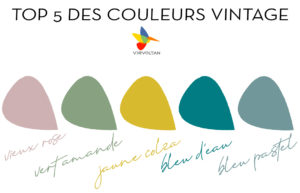